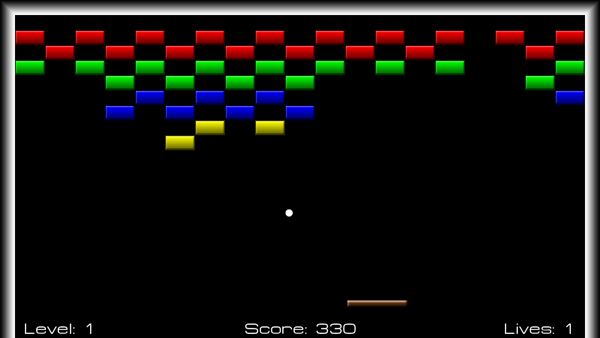 This game is a version of the old Breakout games, and is currently in development.  It is more about game play, with language being usually limited to the game title, menu screens, and some game play text.  The idea is more about language immersion rather than active language learning.  However, audio files for the colors of the bricks as they are being destroyed can be played.

The game’s text is usually all that needs to be translated.  This includes the game’s title, menu options, and some game play text items.

Audio files can be added for the colors of the bricks that can play as they are destroyed.  Note, that while playing, the bricks can sometimes be destroyed in quick succession based on the circumstance.  This may lead to an undesirable side effect of audio overlapping or being cut off, however this effect will be minimal.